It was 1886 and they wanted to call their little settlement “Never Sweat,” due to the valley’s warm dry winds. But the federal government named it Dubois, after an Idaho senator of the era. Today, the town of Dubois is a quaint little community located along the Wind River, rimmed to the south by the Wind River mountains and to the north by the Absarokas. It’s an area of striking contrasts from the badlands east of town, to the high peaks south, north and west.

Dubois has a rich history typical of the Old West. Many hunters, trappers and explorers passed through the Upper Wind River Valley in the late 19th century, including Kit Carson, Jim Bridger, and later, Butch Cassidy. Sitting in the valley between the Absaroka and Wind River mountain ranges, Dubois is nicknamed the “Valley of the Warm Winds.” Wooden boardwalks, pioneer architecture and a rich history welcome visitors like a warm embrace. Stop and stay awhile and see some of the sights. 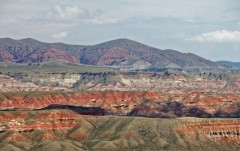 Whiskey Mountain looms to the south and can be viewed from the windows of most homes in Dubois. The mountain acquired its name from a local story about cowboys who lost their whiskey stash in a nearby creek.

While several elk herds winter on Whiskey, even more take up winter residence on the Wyoming Game and Fish Department’s Inberg-Roy management area on the East Fork of the Wind River. There, approximately 2,500 to 3,000 elk winter from mid-November to mid-April.

Dubois is an area of great diversity in wildlife. Big game species include bighorn sheep, elk, mule deer, moose, antelope and black bear. Cougar and grizzly bears are occasionally sighted, as are wolves. The area also has a multitude of small wildlife species and migratory waterfowl.

Recreational opportunities in the Dubois country include many scenic areas, camping, fishing, hunting, horse packing, hiking, photography and a large array of remarkable views for the artist. And that’s just in the summer. There’s a lot to do in the winter, too.

The Upper Wind River Country has more than 150 miles of groomed snowmobile trails that have access to the Continental Divide Trail. The Continental Divide Snowmobile Trail has 360 miles from Lander to Yellowstone and it also connects to 665 miles of groomed trails. Ice fishing in the winter months is an exciting adventure, as is a dog sled ride at Brooks Lake near Togwotee Pass. Cross country skiers enjoy the packed snowmobile trails, or venture off trail for exciting telemark runs.

Also open to the public are a covered swimming pool, town park with playground and tennis courts and the library.

Completed in 1993, the center plays tribute to one of the most stunning of all North America’s big game animals, the Rocky Mountain Bighorn Sheep. Dubois is home to the largest wintering bighorn sheep herd in the Lower 48.

Since 1949, more than 2,000 sheep have been transplanted to Utah, Idaho, South Dakota, New Mexico and to other areas of Wyoming from the herd on Whiskey Mountain.

The center offers interpretive displays on the bighorn sheep as well as acting as a repository for research documents. A small mountain is the centerpiece of the 4,250-square-foot building. The mountain displays the sheep in its natural habitat.

Dubois is situated in the “banana belt” of Wyoming with Chinook winds that help keep you cool in the summer and melt snow in the winter. The town has a diverse economy with working ranches, outfitters, artists, craftsmen, and loggers.

Dubois offers convenient services and accommodations to both residents and visitors. A 9-hole golf course is located on the west side of town. The Wind River Historical Center and Dubois Museum is filled with the history of Dubois, housing many artifacts of days gone by. The museum conducts free tours of a Sheepeater Indian sheep trap July-September.

PEAKS OF THE WIND RIVER RANGE

There are 2.4 million acres of national forest, which surround Dubois. Of this acreage, 1.5 million acres are designated as wilderness, where mechanized equipment is not allowed. Gannett Peak, located in the Shoshone National Forest, is the highest peak, located in the Wind River Range, with an elevation of 13,804 feet. It is due south of Dubois, but it is hidden from sight by the foothills and peaks looming over the valley floor.

Located 20 miles west of Dubois, and about 7 miles off the main highway, Brooks Lake is located at the base of Brooks Lake Mountain. Brooks Lake Lodge, which was built in 1922 to serve tourists en route to Yellowstone National Park, is listed in the National Historic Register. The lake, lodge and mountain were named for a former governor of Wyoming, Bryant B. Brooks.

THE ERA OF THE TIE HACK

A memorial west of Dubois pays tribute to the timber harvesters of yesteryear. Timber harvesting has been a part of Dubois since its early settlement days. In 1914, timber harvesting began on the forests of the Upper Wind River in the DuNoir Valley, in order to supply railroad ties to the Chicago and Northwestern railroad. Thus began the era of the famous ‘Tie Hack’ – the nickname for the job of cutting railroad ties.

During the Tie Hack era, ten million ties or approximately 40 million board feet of lumber was logged from the surrounding hills. The main operation was run by the Wyoming Tie and Timer Company, whose employees were mostly Swedes and Norwegian immigrants. Their dedication to the drink, vigorous brawling and feats of strength brought to Dubois a colorful and lively bunch of characters.

Remnants of the flumes from this bygone era can still be seen west of Dubois. A 14-foot limestone monument, overlooks the site of the Tie Camp.

For more information on Dubois stop at the Dubois Chamber of Commerce.